On August 11, 2021, a team lead by Zhi-Fang Xu, Associate Professor at the Department of Physics and founding researcher of the Shenzhen Institute for Quantum Science and Engineering (SIQSE) at the Southern University of Science and Technology (SUSTech), cooperated with Professor W. Vincent Liu of SIQSE and the University of Pittsburgh, USA, and Professor Andreas Hemmerich from the University of Hamburg, Germany.

They published a research paper entitled “Evidence for an atomic chiral superfluid with topological excitations” in one of the world’s leading multidisciplinary science journals, Nature. For the first time, Zhi-Fang Xu’s team observed a global chiral atomic superfluid with topological excitations induced by interaction in an optical lattice similar to hexagonal boron nitride.

Searching for topological superfluids and superconductors has been an outstanding goal in condensed matter physics since the discovery of the He-3 A phase in the 1970s. Both the novelty of its fundamental properties and the far-reaching prospects of its potential application have encouraged generations of researchers.

With the rise of cold atom quantum simulation in the past two decades, scientists hope to achieve atomic p+ip superfluidity through a p-wave Feshbach resonance among fermionic atoms. Unfortunately, unlike s-wave Feshbach resonances, quantum gases in the presence of a p-wave resonance still face the challenges to overcome severe particle loss, and hence, short lifetimes. Therefore, the search for a material, natural or artificial, that intrinsically exhibits topological superconductivity or superfluidity is still ongoing. 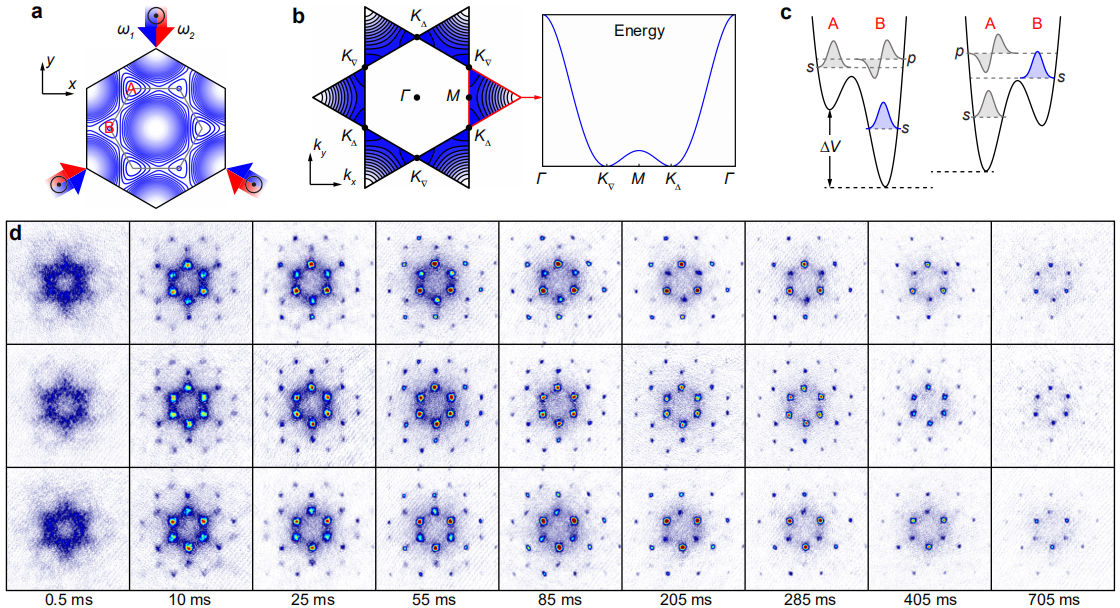 In 2011, A. Hemmerich’s group confirmed the first experimental evidence for orbital superfluidity in the P-band of a bipartite optical square lattice, where Rb-87 atoms condense at the staggered chiral px+ipy/px-ipy orbitals. In 2016, further theoretical calculation showed that the quasiparticle excitation spectrum of this superfluid possesses Dirac bosons with π Berry flux.

Although the local time-reversal symmetry is broken, it still preserves the time-reversal plus a translation by a primitive lattice vector, which leads to topological trivial properties for its quasiparticle excitations [Z.- F. Xu, L. You, A. Hemmerich, and W. V. Liu, Phys. Rev. Lett. 117, 085301 (2016)]. A Zeeman-like bias is proposed to add on px+ipy and px-ipy orbitals to realize a topological quantum phase transition. However, it is still an experimental challenge to implement this scheme for neutral atoms with orbital degrees of freedom in optical lattices. Figure 2. (a) Evolution of chirality. (b) Stacked histograms of chirality for different holding times. (c) In situ absorption images are recorded of a plane oriented perpendicular to the x-y plane. A stream of atoms escapes from the trap along the direction of gravity for holding times between ten and several hundred microseconds.

Applying a time-of-flight imaging technique in experiments detected that for long periods of time, the atoms in the optical lattice spontaneously condensed at one out of two possible minimal energy points (K points) of the second Bloch band with the same probability. Theoretical analysis pointed out that the condensate exhibits global orbital angular momentum. The atoms form a self-ordered pattern of local U(1) phases and orbital rotations across the lattice, resembling a superlattice array of vortices in a Bose-Einstein condensate.

The state breaks both U(1) phase rotation and time-reversal symmetries spontaneously and globally.  A major feature of this novel state is that the quasiparticle excitation bands are found to be topological accompanied by edge excitations by analyzing an effective phenomenological model fixed by experimental parameters. The observed bosonic phase is expected to exhibit phenomena that are conceptually distinct from, but related to, the quantum anomalous Hall effect in electronic condensed matter.

Xiao-Qiong Wang, a postdoctoral fellow, and Guang-Quan Luo, a doctoral student, both of Zhi-Fang Xu’s research group, are the co-first authors of the paper. Zhi-Fang Xu, W. Vincent Liu, and Andreas Hemmerich are the co-corresponding authors. The Department of Physics at SUSTech is the first affiliation, and SIQSE is the second affiliation of the paper.

This work was supported by the National Key R&D Program of China, the Key-Area Research and Development Program of Guangdong Province, the National Natural Science Foundation of China (NSFC), and the high-level special funds from SUSTech. During the initial stage of laboratory construction, the experimental team was supported by the Department of Physics and the SIQSE at SUSTech.