The exploration of new materials and their physical properties are one of the important research directions which have attracted widespread attention in the field of condensed matter physics and materials science recently due to their exotic quantum phenomena and physical properties. Topological materials have some intrinsic physical properties that are independent of the surface structure. These properties are topologically protected, such as quantum anomalous Hall effect, topologically protected surface or edge states, and chiral anomalies. It is because of these fascinating and important features that topology materials have the great potential to be used in future electronic technology and information fields. Therefore, exploring and artificially designing stable ideal topological materials has become one of the central topics at the present.


Recently, a series of important advances in theoretical research on topological materials have been achieved by the group which under the supervision of Associate Professor Hu XU from Department of Physics. Some of their results have been published on Physical Review Letters and Nano Letters, both of which are top journals in the field of physics and material science. The rest achievements are published in 8 papers on the journal of Physical Review B, five of them were published as Rapid Communications. The members of Hu XU’s team on the field of topological materials (Figure 1) include: PhD candidate Yuanjun JIN, PhD candidate Bowen XIA, PhD candidate Zhongjia CHEN, Dr. Rui WANG, Dr. Jinzhu ZHAO and Dr. Baobing ZHENG. 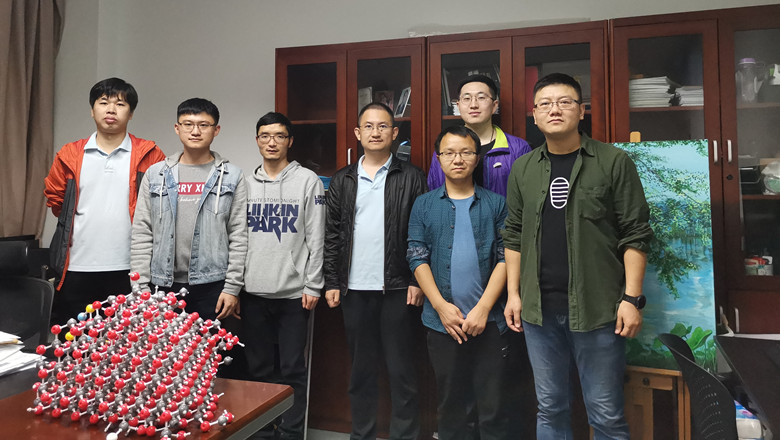 Based on the parity analysis of time reversal invariant momenta (TRIM), Xu Hu's team conducted a systematic research on ferromagnetic topological materials with central inversion symmetry, and determined for the first time the requirements for the occurrence of magnetic topological semimetals with even pairs of Weyl points. For a ferromagnetic system with inversion symmetry, there are two distinct topological phases based on parity arguments as shown in Figure 2. The first one is that the product χp at the eight TRIM points is -1. In this case, planes of k3 = 0 and k3 = π possess the opposite Chern numbers, this situation is generally believed that the number of pairs of Weyl points in the system is odd. In the second case, the Chern numbers of both k3=0 and k3=π plane are 1, and therefore χp is 1. In this case, if there are band crosses (middle and right pictures in Fig. 2b), it is the proposed magnetic Weyl semimetals with even pairs of Weyl points. This work provides a universal approach to theoretically explore and design ferromagnetic Weyl semimetals through parity analysis. In addition, if there is no band cross between the two planes (Figure. 2b left), a three-dimensional quantum anomalous Hall insulator is obtained, which is another important work of the Hu Xu’s group. (Phys. Rev. B 98, 081101(R) (2018)). 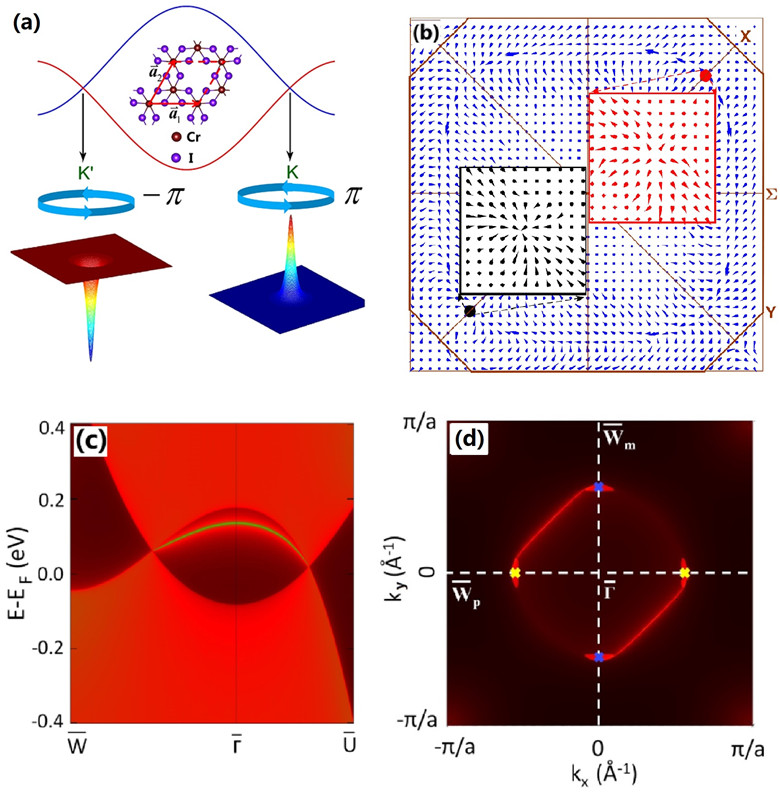 In the paper published in Nano Lett., Hu Xu’s group present a recipe that leads to Dirac phonon states with quantized valley Berry phase in 2D hexagonal lattices by first-principles calculations. With the development of research, the classification of topological materials is becoming more and more diverse. Up to now, topological concepts have mainly highlighted electron related systems. Beyond the various nontrivial fermionic electrons, the investigations of topological states are also intensively generalized to bosonic systems, such as photons in photonic crystals, classical elastic waves in macroscopic artificial phononic crystals, and phonons in crystalline materials. However, the progress of research on topological phonon states at THz is quite slow. Theoretical study shows that these non-trivial intrinsic quantized collective excitations of atomic vibrations at THz frequency are of particular importance, which can promote fundamental investigations and promising applications related to phonons, such as dissipationless phonon transport and quantized phonon Hall effect. Therefore, finding topological phonon states in real materials is an urgent problem to be solved in related fields. In this work, Hu XU's team performed lattice dynamics calculation based on the density functional theory, constructed a tight-binding Hamiltonian similar to electronic system based on a second-order tensor of force constants and used it to obtain the Berry phase and topological edge states of the phononic system. On this basis, they performed high-throughput calculations and found that the Dirac phonon state with quantized valley Berry phase is universally present in two-dimensional hexagonal lattice materials (Figure. 3a). The research results play an important role in further research on topological phonon states and their practical applications.


It is reported that besides the important breakthrough in the field of topological materials, Hu XU's group has also made some progress in low-dimensional materials. For example, in collaboration with Professor Xiaobao YANG of South China University of Technology, they overturned the view that the single-layer boron plane must be metallic in the study of single-layer boron materials, and obtained a series of low-dimensional semiconducting boron materials. This work will promote the potential application of low-dimensional boron materials in the field of optoelectronics. This paper was published in JACS (see J. Am. Chem. Soc. 139, 17233 (2017)) and Hu XU is the co-corresponding author. In addition, Hu XU’s group has also collaborated with Associate Professor Ziliang SHI of Suzhou University on the study of self-assembly growth mechanism of surface covalent nanostructures on gold substrates. The related work was published in Nat. Commun. (see Nat. Commun. 10, 70 (2019) for details). Xu Hu is the co-corresponding author of the article, while PhD candidate Zhe ZHANG of his group is the co-first author of the article.


These works are supported by the National Natural Science Foundation of China, the Guangdong Natural Science Funds for Distinguished Young Scholars, and Shenzhen Science and Technology Innovation Commision funds for fundamental research.