Viscoelasticity – A ‘hidden’ degree of freedom for governing Mott criticality

The Mott transition has been one of the central themes in condensed-matter physics for more than half a century and is originally thought to be driven solely by correlated electrons with an Ising criticality. Recent studies on the known Mott systems have shown that the lattice degree of freedom is also at play, giving rise to either Landau or unconventional criticality. However, the coupling mechanism of charge and lattice degrees of freedom around the Mott critical endpoint remains elusive, leading to difficulties in understanding the associated Mott physics.

One of the major reasons is that the materials with Mott transition are rare. The known Mott systems are mainly limited to Cr-doped V2O3 and organic salt k-Cl, which has severely impeded the study of this kind of transition. A research team led by Assistant Professor Shanmin Wang from the Department of Physics & Academy for Advanced Interdisciplinary Studies at the Southern University of Science and Technology (SUSTech) has recently reported their latest progress on the study of Mott transition in PbCrO3 by measuring the lattice parameter at pressure. This led to the discovery of a Mott transition mechanism, a long-standing issue that has eluded physicists for more than half a century.

Their results showed that the Mott transition and the associated lattice Mott criticality are mainly governed by viscoelasticity, likely due to the coupling of lattice elasticity and electron viscosity. Their work, entitled “Giant viscoelasticity near Mott criticality in PbCrO3 with large lattice anomalies”, was published in the high-impact academic journal Physical Review Letters.

The Mott transition was named after Nevill F. Mott, a Nobel laureate in Physics in 1977, who originally theoretically conceived this class of intriguing insulator-metal transition in correlated systems. In addition to the insulator-metal transition, the Mott transition is mainly characterized by a first-order isostructural transition ended at a second-order critical endpoint in the associated P-T space (Fig. 1). This is reminiscent of the conventional liquid-gas transition. Critical properties of a Mott system are expected to be described in the framework of the scaling theory of a known universality class, allowing gaining insights into the collective nature of the system. 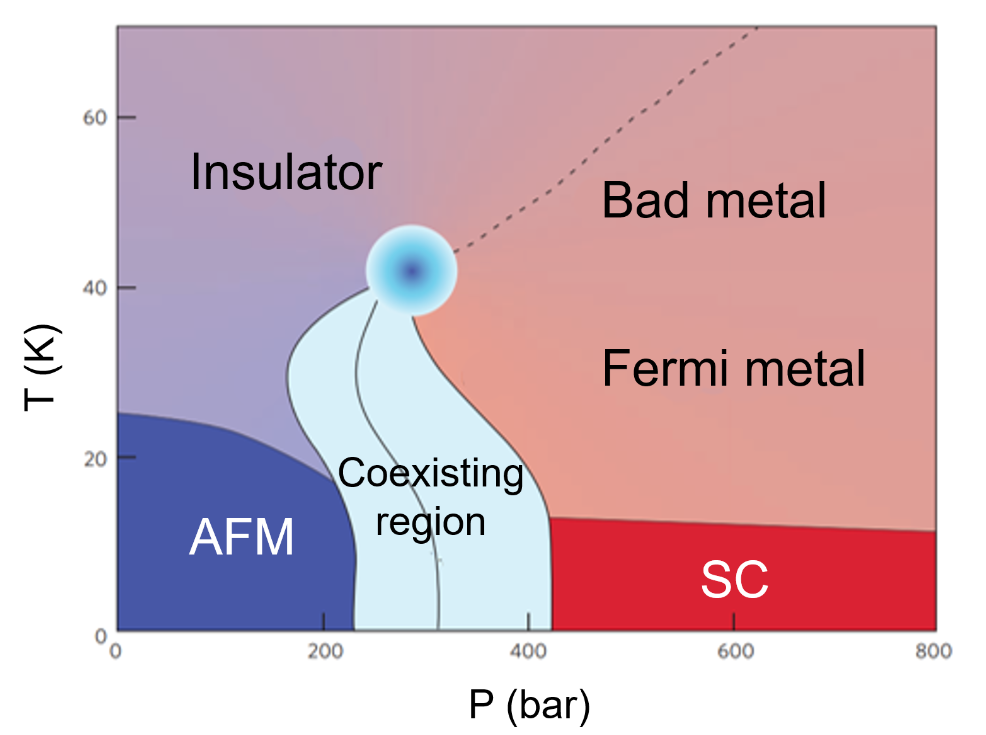 Intuitively, the lattice seemingly plays as a glue for mediating electrons to form new collective states around the critical endpoint, similar to the mechanism for forming Cooper pairs in conventional superconductors. Such new electronic states should have viscosity due to the frequent electron-electron collisions, as the thermally-induced scattering by the lattice is completely suppressed. Materials with viscoelastic properties are expected to exhibit many mechanical anomalies, explaining the Mott critical behaviors (see Fig. 2), including unusual Mott criticality, a crossover of first to second-order transition at high temperature, anomalous lattice behaviors, negative stiffness, and extremely high dynamic bulk modulus.

Figure 2. In a metal, under certain circumstances, the coupling of lattice elasticity and electron viscosity may form viscoelasticity.

The lattice parameter can provide a straightforward and clean probe for exploring the viscoelastic effect without involving complex plastic deformation. Thanks to the advances of High-P techniques, the state-of-the-art High-P synchrotron XRD combined with a precise temperature control is a powerful tool to look into the Mott transition by measuring the lattice parameter under varying P-T conditions (Fig. 3). The expected critical elastic anomalies can thus be explored by volumetric (V) analysis. However, the known Mott systems with low critical pressures (i.e., below 1 GPa) are unfavorable for the High-P XRD experiment. In this regard, as a recently-identified Mott system, PbCrO3 (by the same team, S. Wang et al., PNAS 112, 15320 (2015)) is suitable with a moderate critical pressure of ~3 GPa. 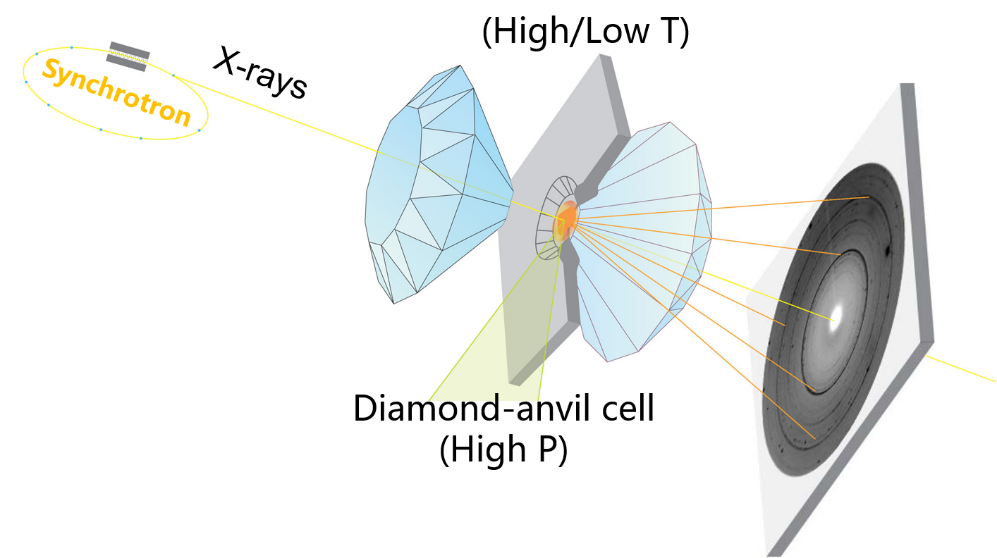 The research team systematically studied PbCrO3 with a focus on its lattice Mott criticality under high pressure by measuring its lattice parameter (Fig. 4), leading to the discovery of giant viscoelasticity around its critical endpoint. Based on the viscoelastic effect, the observed elastic anomalies and unconventional lattice can be well interpreted, shedding light on the underlying mechanism of Mott transition. For simplicity, the Low-P insulating and High-P metallic phases are hereafter denoted with α and β, respectively.

Considering no structural change is involved, these phenomena can only be associated with delocalized electrons in b-PbCrO3, which could have distinct collective states with varying temperatures, hence different viscosities. It is speculated that a liquid-like state occurs below 150 K with certain viscosity because the electrons are weakly scattered by the lattice at low temperatures. At 200 – 300 K, the electrons may be frequently scattered by the lattice so that the electron-electron collisions are hindered, leading to the formation of a non-viscous gas-like state. In this case, the interplay between the electrons and lattice elasticity is weak, which is responsible for its normal elastic behaviors (Fig. 5(a)). However, the viscoelastic effect is counter-intuitively increased above 300 K, inferring an unusual mechanism for the formation of large electron viscosity.

In principle, a material with negative stiffness is unstable unless it is pre-deformed (i.e., containing stored energy) and constrained by a soft surrounding matrix to form an inclusion-matrix composite. Negative stiffness can produce extreme physical properties in the composite, including giant damping, time-dependent strain, and extremely high dynamic elastic modulus, as observed in the Sn-included BaTiO3 and VO2 composites. Obviously, b-PbCrO3 is a High-P metallic phase with a pre-strained volume; around the critical endpoint, the delocalized electrons would form a superviscous fluid that plays as a soft ‘matrix’, satisfying the prerequisites for producing negative stiffness. The expected extremely large dynamic bulk modulus (B0) of PbCrO3 are also observed (Fig. 5(b)).

Due to the viscoelastic damping, the lattice strain in b-PbCrO3 is dynamic in nature, which should be out of phase from the stress or applied pressure (e.g., the strain lags behind the stress), especially near the criticality. One of the remarkable consequences is that the sharp volume change is suppressed across the phase transition, resulting in a crossover from the first to second-order transition and a typical P-T Mott phase diagram (Fig. 5(c)).

Figure 5. (a) Isothermal P-V data for b-PbCrO3 collected during decompression. Inset is an enlarged portion of the cases at 390 K and 430 K, showing negative stiffness at the beginning of decompression. (b) Isothermal bulk moduli for both α- and b-PbCrO3. (c) P-T phase diagram. The two spinodal lines are defined by the forward and reverse α-b thresholds. The delocalized electrons in b-PbCrO3 have three different states of ‘liquid’, ‘gas’, and viscoelastic form.

Prof. Shanmin Wang is the first author and corresponding author of this work. Jian Chen, a Ph.D. student in Prof. Wang’s group, is the second author, while Prof. Liusuo Wu and Prof. Yusheng Zhao are the co-authors. The Department of Physics & Academy for Advanced Interdisciplinary Studies at SUSTech is the only corresponding affiliation.

This work was supported by the National Natural Science Foundation of China (NSFC), the Key Research Platforms and Research Projects of Universities in Guangdong Province, the Guangdong Innovative & Entrepreneurial Research Team Program, the Shenzhen Peacock Plan, the Shenzhen Development and Reform Commission Foundation for Shenzhen Engineering Research Center for Frontier Materials Synthesis at High Pressure, and the Research Platform for Crystal Growth & Thin-Film Preparation at SUSTech. High-P synchrotron XRD experiments were performed at the 16-BMD beamline of HPCAT/APS.