Nuclear astrophysics uses the knowledge of nuclear physics to study the energy production and element synthesis of stars, that is, to use the laws of extremely small atomic nuclei to explain the evolution of the huge universe. It is very difficult to directly measure the thermonuclear reactions that occur in the relatively low-temperature environment during the stable evolution of stars. The deep underground laboratory can greatly reduce the interference caused by cosmic rays and provide a measurement environment with an extremely low background, which is essential to the accurate measurement and research of rare reaction events.

The China Jinping Underground Laboratory (CJPL) covers more than 2,400 meters of rock, ranking first in the world. The cosmic ray flux is about 100 times lower than that of the underground laboratory in Gran Sasso, Italy. Eight new experimental spaces were built in Jinping II for multidisciplinary deep scientific research. Among them, the A1 experimental space is used to build the nuclear astrophysics experimental device. Chair Professor Weiping Liu from the Department of Physics at the Southern University of Science and Technology (SUSTech) and the China Institute of Atomic Energy (CIAE) has recently led his Jinping Deep Underground Astrophysics Experiment (JUNA) team to publish their research results of the origin of calcium abundance in the oldest known stars.

Their research, entitled “Measurement of 19F(p, γ)20Ne reaction suggests CNO breakout in first stars,” was published in Nature, a top research journal covering all fields of science and technology. In addition, their paper was selected in the highlight results reviewed in the “News & Views” section of Nature.

The JUNA team developed a 400 kV accelerator with the highest beam current in the world. It established a BGO gamma detector and He-3 neutron detector with high efficiency and resolution, thus providing world-class conditions for direct measurement of important nuclear astrophysics reactions down to the so-called Gamow window (Figure 1).

The reaction studied in JUNA is relevant to the oldest star found so far, called SMSS0313-6708, because it is implicated in one of the mechanisms proposed to explain the chemical abundances measured in the early star. In this mechanism, after light metals such as carbon and oxygen were made, early in the star’s evolution, a subsequent follow-up proton and/or neutron capture reactions generated abundances of heavier elements, until to calcium. This work established a comprehensive technique to study more nuclear astrophysics reactions in JUNA CJPL in the future.

The JUNA team led by Prof. Liu discovered that a particular reaction, which produces the element neon, could be 7.4 times faster in population III stars compared to previous estimates. The finding explains the high calcium content of SMSS0313-6708 and provides an updated measurement of this crucial reaction that has been previously inaccessible in aboveground laboratories (Figure 1).

Stars are the nuclear forges of the cosmos, responsible for the creation of most elements heavier than helium in the universe. Some of these elements are created in the hearts of stars over the course of billions of years, whereas others are formed in just a few seconds during the explosive deaths of massive stars.

SMSS0313-6708 is an ultra-metal-poor star that is speculated to be a direct descendant of the first generation of stars in the universe that formed after the Big Bang. The observable composition of an ultra-metal-poor star is a time capsule to the environment before the first galaxies formed — complementing the exciting upcoming observations of the James Webb Space Telescope, which is now aiming to give a first look at the earliest stars and galaxies.

The scientist of the JUNA project successfully developed the F-19 injection target with the strongest radiation resistance. As one of the first achievements of the JUNA experimental facility, the successful implementation of the relevant experiments proves that JUNA is fully capable of conducting deep-core astrophysics research.

Nature reviewers believe that “The manuscript and the topic are of general relevance for many research disciplines and provide interesting new pathways for future nuclear astrophysics studies”.  John Mather, the 2006 Nobel Laureate in Physics and Chief Scientist at JWST, wrote, “And congratulations on your new measurements; they seem quite important”. 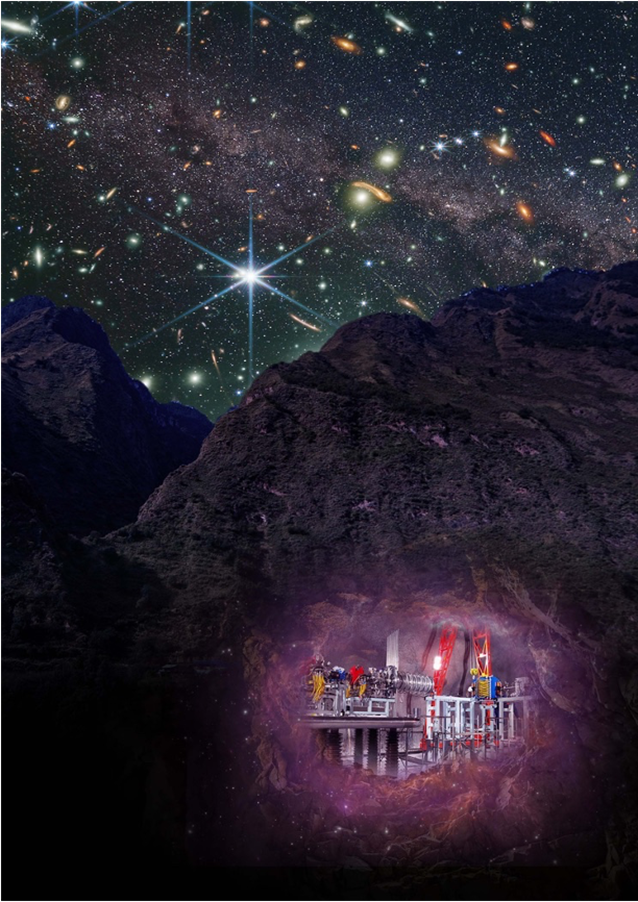 Figure 1. The artist’s image of JUNA. The background of the sky is the first deep-field photo released by the JWST astronomical telescope. The mountain is the Jinping Mountain in Xichang, Sichuan, and the experimental device in the middle of the mountain is the accelerator and detector of JUNA nuclear astrophysics.

Dr. Liyong Zhang from the Beijing Normal University (BNU) is the first author of this paper. Prof. Weiping Liu from SUSTech and CIAE, Prof. Jianjun He from BNU, and Prof. Michael Wiescher from the University of Notre Dame (UND) are the corresponding authors. The authors acknowledge contributions by CIAE, BNU, UND, the Institute of Modern Physics (IMP-CAS), Yalong River Hydropower Development Company, and many other domestic and international universities and research institutes.